As many of you may know already, I went on an adventure this past August. I spent a week in Scotland. While I did do some normal touristy things, a good portion of the trip was going where I needed to go.

For my entire life, I’ve always yearned to go home to Scotland. Where this came from, I didn’t know. The music, the history, the very land called to me as sure as the south calls to birds during the fall. I went in hopes of finding the one spot that my soul yearned to go back to.

One of them was outside of the town of Rosemarkie, on Black Isle. This is just slightly north of Inverness, across the Moray Firth. It’s not a big touristy spot, but well worth going to.

The name and the photos appealed to both me and my traveling companion, Tara. After doing a dolphin tour (yes! baby dolphins!), lunch, and a few other unexpected stops, we made it to the head of the trail.

It wasn’t even five minutes into the hike when I turned to her and said, “I can’t stop smiling!” And I couldn’t. I’d found the second place that called to me, and the first that was unexpected.

The entire hike was exhilarating. Not in the sense that it was a hard hike but the energy that surrounded me, seeped into my pores and invigorated my very soul. The Wiccan part of me was home. My soul danced with joy. My cares, worries, and stresses melted away. And I let myself hear what the woods were telling me.

Then, we came to the end of the trail and found this: 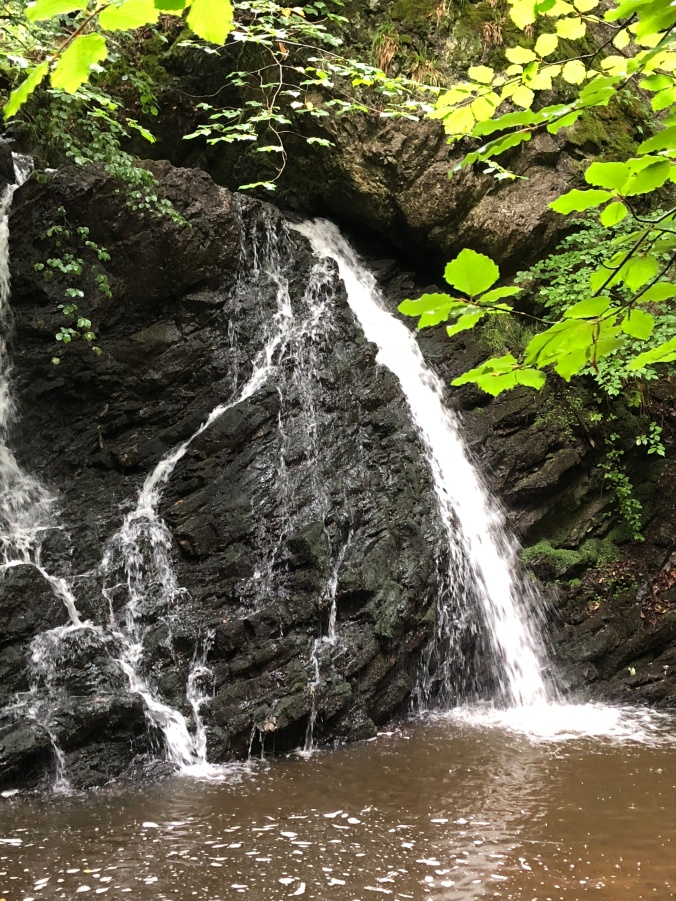 I sat on a rock and closed my eyes, opening myself up to the sounds around me. The rushing water, changing tone as it moved downstream. The light rustle of leaves being moved by the wind. The smell of damp earth. The feeling of being welcomed, and at peace.

As we headed back out, I heard music. Not just any music, but something that bordered on magical. I turned to Tara and asked, “Do you hear that?” I needed confirmation that I wasn’t the only one who could hear it. That it was in the air was not in doubt. Simply if I was the only one meant to hear it, and heed its’ call.

She nodded. She heard it as well. It would stop for a time, then start up again, as we hiked out. Eventually, we caught up with a pair of hikers. She had been playing traditional Scottish and Irish music on a fife as she and her companion walked. We thanked her for the music, as it was the perfect accompaniment to the afternoon.

We got back to the car park, and I leaned against the driver’s side door. Looking back to the trailhead, I said a silent thank you for all creatures. Both the visible and unseen. For they had welcomed me home as a kindred spirit. I had been found, but I was never truly lost.

5 thoughts on “A Story of Scotland – Fairy Glen”